“Much of my running career has been downswings. i’m taking this as my next opportunity to keep Momentum going and follow it up with another great race in December ” – Sydney Gidabuday reflecting on his 62:32 HM debut and his upcoming 10k in his latest Tin Talk piece. 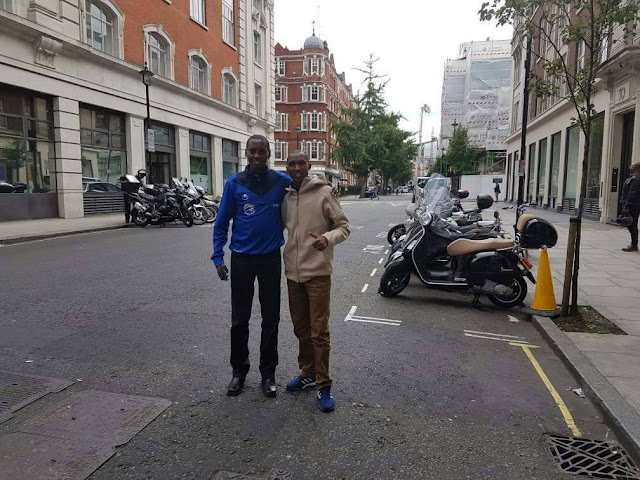 Great Britain’s Callum Hawkins says he is relishing the chance to battle Sir Mo Farah in the marathon from next year, after finishing an impressive fourth at the World Championships in London.

The Scot equalled the best-ever finish by a British man in the event, and the best in 22 years since Peter Whitehead’s performance in Gothenburg with his display on Sunday.

The 25-year-old, ninth at last year’s Olympics in Rio, clocked a personal best two hours 10 minutes and 17 seconds as he crossed the finish line at Tower Bridge 26s off bronze.

Hawkins’ sense of slight frustration at missing out on a medal is a clear sign of his confidence – and he is determined to give Farah a run for his money when the 10-time global track champion takes to the roads full-time.

“Hopefully he’ll be seeing my back,” he joked.

Mo Farah could find himself fending off competition from Callum Hawkins before long, according to the 25-year-old

“He’s a quality athlete and hopefully it’ll be a good head-to-head.”

“I was wanting to maybe sneak a medal and to actually see it as I was finishing was a bit tough,” Hawkins said. “But I gave it my all and I couldn’t ask for anything more performance-wise.

“I knew I could be close to a medal, but there are some quality athletes. Usually the big guys don’t quite turn up, but they all turned up.”

Hawkins finished strongly, picking athletes off late in the race after deciding not to go with the leaders when they made a move at the halfway point.

“I should have maybe held them a bit closer when that big move went, but it was a huge move,” he continued.

“But if I had I would have been almost walking towards the end.”
Source : SkySports News

Gidabuday Sports Tourism Foundation in collaboration with Arusha Athletics Association is gearing up for the Zanzibar Revolutionary Day Festivities that will include 10 Kilometers Fun Run as well as several events of Track and Field.

The Track and Field events to be held will be as follows;
1)    5000 Meters for Men and Women2)    800 Meters for Men and Women3)    400 x 4 Relays for Men and Women4)    200 Meters for Men and Women5)    Long Jump for Men and Women
The rare and unique combination of fun run and track meet will be held at the famous Sheikh Amri Abeid Stadium in Arusha on January 12th 2020. Emanuel Giniki Gisamoda and Alphonce Felix Simbu – the London World Championships Bronze Medalist will be present as well as other national and world class athletes. Head of coordinating team Eva Gidabuday is pleased to see outburst of support from various sources including athletes themselves, clubs, coaches and media as well as Athletics Tanzania; the organizers hope to stage a historic and sustainable track meet.
“We actually hope to have multiple series of track meet this year the first one being this one and may be stage another one in March and May this year before the end of track season calendar” says Mrs Gidabuday.